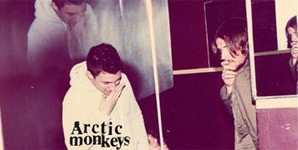 The hype around the Arctic Monkey's third studio album was huge. It was one of those albums that was in danger of being in the ridiculous situation of being a 'classic' before it was released.or even heard. That, coupled with the fact that their two previous albums are not easy ones to follow may have led to their recent transformation. The Sheffield four-piece headed off to the Californian desert to record their latest offering Humbug.

Humbug is heavier and darker than their previous material; perhaps this is the influence of Queen Of The Stone Age's Josh Homme, who produced the majority of the tracks. Or maybe it's just the refreshing sign of a band growing into their sound and looking forward rather than relying on past success.

The raunchy double-entendres of Propeller are not exactly what you'd expect of the opener to an Arctic Monkeys album. 'I can't get it started on my own.have a spin of my propeller', you don't have to be Einstein to figure out what this one's about! Closely followed by the now familiar hit Crying Lightning, Humbug immediately lives up to that hype. The up-tempo Pretty Visitors is the closest nod to the Arctic Monkeys of old but still sits well within the album as a whole. The line 'what came first, the chicken or the dickhead' and the general lyrical content of Humbug shows that Turner is still the master of clever, snide and often very subtle lyrics.

The album in general is a little slower tempo than we are used to but it suits their new sound. Turner's vocals have also matured. They are deeper and his trademark intonation and articulation is even more pronounced (if you'll pardon the pun!), making songs like Cornerstone mesmerising. And if you had to pick one stand out track, it would be that one. Cornerstone is a beautiful soaring ballad in which Turner draws you in with his imagery and more emotionally deep lyrics and delivery than his past material.

Musically mature, Humbug is a definite step up for the Arctic Monkeys who have used it to build on their strengths. Despite the heavier sound and the slick production, they have managed to retain their northern charm and wit that has served them so well in the past. Humbug is definitely a candidate for album of the year.