Review of Arctic Monkeys live at the MEN Arena on Saturday 21st November. 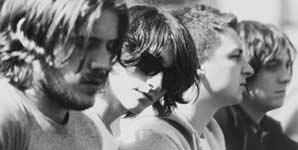 How to tackle the issue of becoming a household name? Milk your early efforts to keep the fans interested, at the expense of forward motion? Or simply nosedive in credibility, for the sake of sales? Note how, so rare is its occurrence, third option 'have the balls to pull a genuinely fascinating and near-faultless effort out of the bag' barely gets a look-in.

Arctic Monkeys' latest effort, Humbug, is that rare third route and plenty more besides; the burgundy curtains and sparse film-set lamps on show tonight are so far from the kitchen-sink melodrama of yore, it's difficult to imagine a transition of more extremity. They may still possess the lyrical gymnastics and octopedal drumming that's been their calling card since day one, but it's a different ball game entirely beyond that point.

Humbug highlights Potion Approaching and Pretty Visitors are menacing foils to the disappointed minority who came for their "one song", while their most Grateful Dead-esque moments of brooding psychedelia are, in The Jeweller's Hands and hushed opener Dance Little Liar, those that send the head-scratching hordes still struggling to find the exit of last night's Kasabian appearance directly to the bar. They may have ditched the adolescent indie and, in the process, been ditched themselves by a handful, but their move toward a maturity currently unrivalled has swung as many in the opposite direction, yours truly included.

It's at their most personal moments that Alex Turner's lyrics shine; Cornerstone is an improbable singalong, Turner recovering after the brutal pairing of Crying Lightning and The View From The Afternoon to mull on elusive love, while Secret Door's glitter gun electrify its hands-aloft climax. That's not to mention explosive closer 505, which effortlessly ramps up its contention as their most thrilling output thus far and could arguably be up there as one of the tracks of the decade.

Far from the Reading and Leeds headliners that struggled to make their week-old LP fill the gaps between their better-known, tonight's Arctic Monkeys are proof of the sea change they've experienced in recent times. Just three years since they reinvented one genre, they're forging ahead with their own blend of trippy balladry and moody garage, and based on tonight's evidence, they're miles ahead of any competition.