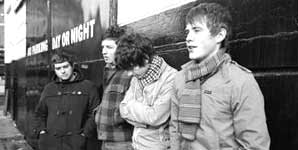 There was a sense of excitement surrounding this gig at the Brixton Academy. The fact that there were very few touts selling tickets and the ones that were demanding Â£200, gives you an idea of the popularity and demand this group has achieved in a very short space of time. Tickets for all venues sold out in less than 30 minutes and with this being the final jaunt of their UK tour it made it all the more special.

The Monkeys set kicked off to an arousing applaud but to the crowds surprise Ronnie Wood took to the stage to introduce "His new best friends, the Arctic Monkeys". Turner and co. duly took to the stage amid a feverish crowd. From that moment on you had a feeling it was going to be one of those shows to remember.
The band kicked off the performance with one of their slower songs 'Riot Van' in what seemed like an attempt to sedate the crowd a little. This was short lived as they followed with their cracking current single 'The View from the afternoon'. This set the tone for the rest of the set; energetic lively tracks that all seem to strike a chord with an adoring crowd.

Everyone present seemed to know the words to 'Mardy Bum' and you could barely hear Turner sing through the audience's screams on what is undoubtedly a huge anthem. It was at this point where things seemed to turn up a notch and by the time 'I bet you look good on the Dancefloor' kicked in the crowd had been whipped up into a beer soaked frenzy.

The confidence Arctic Monkeys displayed showed their recent touring has allowed them to experiment and gain some experience. One specific trait is their upbeat tempo. Nowhere was this more evident than in the 'dancey' link up between 'Perhaps Vampires Is A Bit Strong But...' and 'Dancing Shoe', much to the crowds delight.

The final part of the gig saw the band ties things up with four of the strongest hits from their debut album. 'When The Sun Goes Down' saw Steve Graham hijack the stage after the opening lines to rant, "These boys are fucking fantastic. We've not had anything like this since The Clash. I'm the fucking scummy man." The huge guitar rift followed and the crowd was once again going crazy. 'Fake Tales of San Francisco', 'From Ritz To The Rubble' and 'A Certain Romance' wrapped up what was an all round great performance with the lighting again managing to catch the atmosphere of the tracks fantastically well.

Acknowledging that the gig was the bands last in Britain for some time, Turner thanked the crowd at the end and added: "We're not gonna be playing in the UK for a while cos we'll be heading off overseas. We'll be back for the festivals though and I hope to see you there. I won't know if you're there but you'll know we're there. It has been a pleasure." The crowd pleaded for more but it wasn't to be and with no encore everybody left with a smile on their face.