Arctic Monkeys - Leave Before The Lights Come On Single Review

Arctic Monkeys
Leave Before The Lights Come On
Single Review 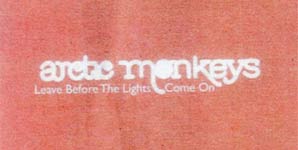 Since the turn of the year there has been a new band out and about with Singles, a debut album, an EP, Supporting Oasis and generally touring everywhere. Not to mention the fact that they have already lost a member of the band and replaced him. This shows that this is not a band that will be here and gone within a year, but a band that are here to stay and show what they are made of.

The Arctic Monkeys just keep on banging out tunes as quick as Aunt Bessie bangs out new frozen homemade grub. Leave Before The Lights Come On is that next new hit to come from the boys from Yorkshire. Like Aunt Bessie Mr Alex Turner has again come up with the right ingredients for yet another Monkeys classic tune. Alex Turner always captures the typical every day life that people go through, and this is where he gets us all hooked. The part that we can relate to, the part that we can relate to these top celebrities.

Now the thing is that although The Arctic Monkeys are banging out as many tunes as The Beatles did, the UK public are not what they were (mind you if you listen to my parents nothing is as it was) and might be getting a bit tired of it all. If you're a hardcore Monkeys fan then this is another piece to add to the jigsaw.