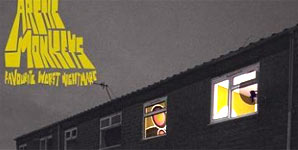 Where do you start with this? The record-breaking sales of the first album? The 'Myspace Phenomenon'? The, across-the-board, critical acclaim? Their newly announced Glastonbury Headlining slot? It's not that easy to just look at this album out of context. Maybe that's the problem with hyping the next big thing. At one point they change from being the next big thing, to being the old big thing, and then the Arctic Monkeys aren't cool because they aren't the next big thing they are just the big thing. And who wants that? The point, of course, to all this is that there is the conflict between making music for the audience to enjoy and the artistic development of a very young band tackling their difficult second album. Who do they wanna be: Oasis or Radiohead?

Maybe the second album syndrome was bypassed by releasing 'Who the fuck are the Arctic Monkeys' EP. The start of this album bears some resemblance to the more direct, bludgeoning approach to riffage that appeared on the EP, particularly on 'Brianstorm', the first single, and first track on the album. Heavy and exhilarating it retains most of the positive attributes from their earlier work such as the quirky juxtaposition of the expected lyrics 'with your ignitions and jokes there are hundreds of blokes that have wept because you've stolen their...Thunder!', but comes across as meatier somehow, maybe the input of the new bassist.

As ever, the lyrical content is the first thing that catches your imagination. Super sharp on just about every line spewed out with the bitter, twisted pronunciation, especially on Balaclava and Fluorescent Adolescent, although my personal favorite is 'this house is a circus/Berserk as fuck'. Thankfully though there seems to be some more emotional exploration within Alex Turner's lyrics on tracks like the mid-album reflective ballad 'Only ones who know', as opposed to the more flippant turns of phrase that sound delicious, but hold little nutritional value.

Musically, too, there seems to have been development, even if the ska-lite influence is still in evidence throughout the album. It would have been so easy to write a few haphazard songs with a loud chorus, but the song structures have started to include more variety. Quiet, reflective middle eights; loud, thrashy bridges and the constant battle between the guitar and the bass to lead the song, all underpinned by that furious, almost relentless drumming. In fact whenever the drumming stops it's more like the eye of the storm than running out of steam.

Whether they live up to their massive hype is still yet to be seen and it's hard to rid your mind of this question, whenever their name is mentioned, as the internet community that spawned them has led everyone with even a passing interest in music to be simultaneously critic and A&R man. Even though there isn't a single on here as catchy as 'Dancefloor' this is an excellent album.