Arctic Monkeys - When The Sun Goes Down Single Review

Review of When The Sun Goes Down Single by Arctic Monkeys

Arctic Monkeys
When The Sun Goes Down
Domino
Single Review 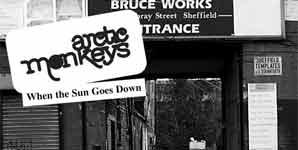 I don't know why I am reviewing this as I think everybody in England has heard it at least 2-3 times a day. Examples of this just this week are as follows - on the radio, in shops (especially record shops), people humming it, via car stereos, and on television. But for people who don't get out much, this is a band that have been raved about in the NME for the last year or so. Currently trendy, and very northernly they are defiantly the flav of the year and may even hold it until the release of the next album. Upbeat, fun, and relevant check it out if you haven't heard before the over excessive airplay starts ruining their well deserved thunder.