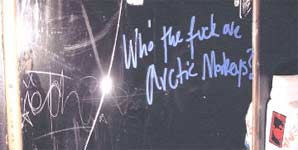 Who The F**k Are Arctic Monkeys? Well if you don't know that by know then you must have been in a coma or you have been cryogenically frozen for the last six months. These guys are the biggest and most exciting band since the Spice Girls, no only joking, since Oasis.

Who The F**k Are Arctic Monkeys? Is the new EP to come from yep The Arctic Monkeys. Debates have started that they are just doing this to make money, but when you hear the tracks you will understand that this is not the case. Funnily enough, the first track is exactly the same first track on the album, but the other four tracks are all new songs. 'Cigarette Smoker Fiona' bang guitar rifts, which are typically that Arctic Monkeys sound.
'Departure Lounge' is a track that you can imagine Alex Turner singing on his own in a smoke filled social club. It is that type of raw track, fantastic though. Next is George Formby, sorry no that's not right, I mean this one sounds like George Formby on lead vocals. Another great track that brings the question can these lads do ought wrong?
Finally, now that all the hype has passed 'Who The F**k Are Arctic Monkeys?' is a message out there to everyone. Bring on the backlash, cause I am sure that they are that confident in their own talents that there won't be any backlash! Who The F**k Were Arctic Monkeys this time last year hey?? Well we all know who they are now don't we? And for the better for UK music

So in short, Debut Album broke all records! NME tour blew Maximo Park off the stage and maybe should have been the headlining band. Cutting it live with ease after supporting Oasis and now on there own tour. Now everyone out there will be waiting for them to trip up on the second album.