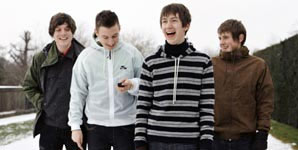 Having triumphed in their Glastonbury headline slot, Sheffield's Arctic Monkeys now stage their own biggest gigs in the shape of two sold-out events to a combined audience of 100,000 people. An eclectic combination of support acts sees Amy Winehouse put aside recent controversies with a professional performance that demonstrates her impressive vocal talent. Mixing tracks from both her albums, it is predictably 'Rehab' which draws the greatest reaction and her set is closed by her cover of The Zutons' 'Valerie'.

Liverpudlians The Coral seem to have a fair number of fans follow their short journey down the motorway, as they are given a warm reception. Showcasing songs from their latest album 'Roots & Echoes', it is old hits 'In The Morning' and particularly 'Dreaming Of You' that make the crowd dance and sing. Britpop veterans Supergrass give outings to a couple of new tracks but draw the majority of their set from their considerable back catalogue. 'Moving' puts bounce into the crowd, while nostalgia washes over during 'Caught By The Fuzz' and 'Sun Hits The Sky'. Finishing with 'Pumping On Your Stereo', they do a decent job of 'warming up' the audience.

Arriving to the 'Rocky' theme, you'd forgive the four Arctics if they were nervous performing to such a sizeable crowd after just two records. But there's no such sign of it though as they open with a string of singles, 'Fluorescent Adolescent', 'I Bet You Look Good On The Dance Floor' and 'Brianstorm' sending the audience crazy. Album songs such as 'Still Take You Home' and 'Dancing Shoes' are greeted equally well and anyone who has any doubts about the band's prowess must be left speechless. Indeed, it is only a technical fault that takes the shine off the performance, with the sound cutting during 'Balaclava' as the band carries on for a couple of minutes unaware. When informed of the incident, Alex Turner admits to feeling like a 'right burk', but the band put it behind them with a perfect rendition of 'Old Yellow Bricks'. It is not the last time that Turner will address the audience though and he proves to have a charming, polite and engaging stage presence, entertaining those present and giving his band mates a chance to catch their breath.

Songs old and new are produced with continued gusto, 'Mardy Bum' proving a mass sing-a-long while 'When The Sun Goes Down' aptly fits the fading light and adds further to the joyous atmosphere. The encore includes B-Side 'Plastic Tramp', to the delight of hardcore fans, while everyone remains in good voice through to the end of closer 'A Certain Romance'. Turner announces that the evening has 'been a pleasure' and it is certainly a mutual feeling. Despite their meteoric rise to stardom happening in such a short time, Arctic Monkeys prove themselves more than capable of entertaining on the biggest of stages, further cementing their position as one of Britain's premier bands.