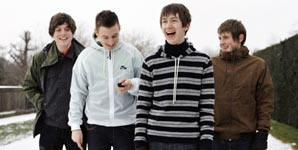 From the Ritz to the rubble indeed, it's been one hell of a journey for the Arctic Monkeys these past two years. Still unsigned back then, but with a plethora of A&R men chasing and a burgeoning following courtesy of a new internet cult known as MySpace, their story is something only the wildest dreams are made of, culminating in a headline slot at Glastonbury last month and their own two-day stadium event here.

Unfortunately, despite the protestations of many of their songs, it seems the scummy men and women they write about have followed them up the M62, as the ungainly sight of numerous girls hitching their pants down to take a leak in the middle of the field whilst watching the main stage, or lads who think it graceful to urinate into plastic pint pots while some of us would rather enjoy the music isn't quite what the civilised among us bargained for. Although maybe the fact there seems to be one available toilet block for near on 28000 punters has something to do with it, while word that the queues for liquid refreshments are anything up to 90 minutes long perhaps offers some explanation as to why antagonism is in the air today.

Which is a sad state of affairs considering the headline act's spurious sense of humour. Not just content with dressing like extras from Chipperfields circus in their last promo video, they've also enlisted the services of a Japanese Beatles tribute band to open today's show. Being the professionals we aren't, we're still outside trying to find an entrance that isn't swarmed by fat men in Hackett shirts chanting "Yorkshire", so unfortunately we miss them.
Maybe next time, eh, or maybe not.

Next up is Amy Winehouse, someone who is fast becoming this year's Pete Doherty in the sense that her media persona is more famous for what she doesn't do than any of her musical output. Well, seriously folks, can you honestly name more than two of her songs? Exactly, but to be fair she does an ample job of keeping the Neanderthals at bay, even if you do get the remote feeling she doesn't quite understand what she's doing here.

Thank God for The Coral then, perhaps the first genuinely exciting act of the day, and a band who at least deserve to be here on musical merit rather than media attention. James Skelly looks a few pounds heavier than the last time we saw him, and despite a nervous start, the likes of 'Goodbye' and 'Pass It On' sound instinctively right for a mid-afternoon jig in the sun. Of course the time to really judge the impact of their new material will be on their forthcoming tour in the autumn, but for now this is a sprightly taster.

Having been around for years, there isn't an awful lot you can say about Supergrass that hasn't been said before, although as one wag put it, "What the hell are they doing on the bill?" is as good a start as any. Hardly current or cutting edge for the heavy bass and beat laden soundtrack of 2007, although to be fair, with a back catalogue like they have, do they really need to be? In a nutshell, no - 'Strange Ones', sounding as fresh and timeless as ever, proves that - but by the same token trying out new material to an audience of this mentality doesn't exactly please the masses either and where they could have had the crowd eating out of the palms of their hands and played a full-on greatest hits set, a chorus of "mehs" break out around the dishevelled cricket pitch instead.

So onto the main course, and with a full scale riot having broke out in one of the beer tents earlier, the only way to appease the tension is for the Arctic Monkeys to go straight for the jugular, which they do with the opening trio of 'Fluorescent Adolescent', 'I Bet You Look Good On The Dancefloor' and 'Brianstorm'. Sadly, no one bothered to tell the soundman of the consequences of stemming the flow, as by the sixth song in the set ('Balaclava'), an unnerving din of silence emerged from the stage, much to the displeasure of the already disgruntled minions as technicians hurried backwards and forwards, one almost tripping over Jamie Cook's guitar lead, to fix the problem.

By the time normal service had resumed, several had already chosen to leave before the lights went out again, and what should have marked a triumphant stage in the Arctic Monkeys rapid ascendance ended up shrouded in chaos.

At the end of the day, a lot of the blame has to lie with the organisation, or lack of it, because for a venue that has regularly held major events for decades now, today just wasn't cricket.