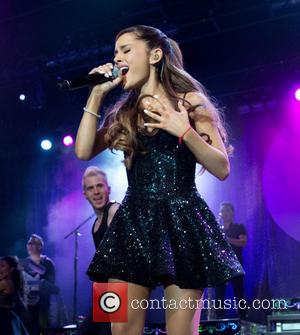 Actress/singer Ariana Grande has added to Justin Bieber's woes by revealing the pop superstar begged her to post a photo of the two of them kissing on Twitter.com.

In a new interview with MTV, the Victorious star admits she never planned to go public with the scandalous smooch - but the Baby singer and his manager Scooter Braun persuaded her to upload it to her followers.

Recalling the moment she and Bieber puckered up for her camera phone during a recent backstage meeting, she says, "Justin was like, 'Yo, let's take a picture', and so I took out my phone... I was just smiling and he kissed me on the cheek.

"I didn't know what to do. I just walked out of the room. I got shy. And then Scooter came to me and said, 'Justin says you have to post that picture', and I said, 'I will not'.

"I was like, 'I can't do that because I don't want the drama that's going to come with that'."

But Grande eventually gave in when Bieber reached out to her personally via social media, and asked her to reconsider.

The 20 year old deleted the snap after she was bombarded with outraged tweets from overzealous Bieber fans, but it was retweeted more than 27,000 times in just three hours.