Ariana Grande insists there is no romance between her and One Direction star Harry Styles, but she was delighted that the hunk wrote the song 'My Everything' for her. 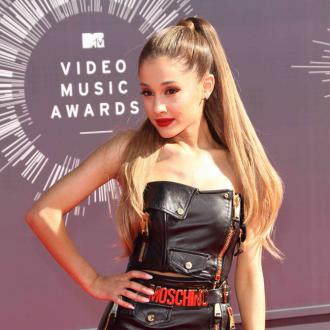 Ariana Grande insists there is no romance between her and Harry Styles.

The 21-year-old star's album 'My Everything' features a track of the same name that was written by the One Direction hunk, but the raven-haired beauty - who is dating Big Sean - claims there are no romantic feelings between them.

Quizzed on whether she was excited to have him write for her, she said: ''Yeah, I was very excited. I mean, he was just visiting the studio and Johan [one of my producers] was like, 'Hey, shall we write a song for Ariana?' And Harry was like, 'Yeah sure!' So it all happened quite randomly.''

When asked if she thinks of him when she performs the song, Ariana added: ''No! I'm sorry to disappoint you ... But there is no romantic attachment between me and Harry Styles.''

However, the 'Problem' hitmaker - who has previously dated The Wanted's Nathan Sykes and The Janoskians singer Jai Brooks - confessed she could see why so many girls lust after the 'Story of My Life' singer.

She added to We Love Pop magazine: ''He is definitely very, very sweet.''

Meanwhile, Ariana is hoping Harry will soon take a break from One Direction so that she can return the favour by penning a song for him to record.

When asked whether she'd write a song for his potential solo project, she said: ''Yeah, if he did one, I'd love to. It's only right, after he wrote one for me. I'd have to repay the favour.''