Ariana Grande whipped up a buying frenzy at the launch of her perfume and sold $30,000 worth of product in just one hour at Macy's. 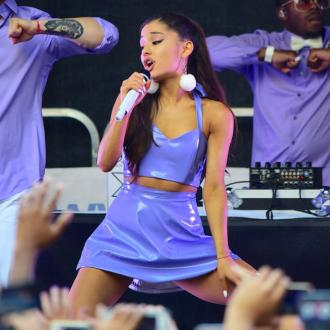 Ariana Grande sold $30,000 worth of perfume in one hour at Macy's in New York.

The 'Break Free' hitmaker launched her fragrance 'ARI by Ariana Grande' on Wednesday (16.09.16) and figures from the first day of sales showed the pop star's personal appearance at the unveiling of the scent helped to move $30,000 worth of merchandise off the shelves.

Upon buying the set fans were treated to a pass to be near the stage outside where Ariana performed her hits 'Bang Bang,' 'Problem,' and 'One Last Time' for fans who were also later treated to a private reception inside the store.

Ariana - who described the scent as ''sweet, yet sexy, with some surprises underneath'' - looked incredible at the fragrance launch

in a matching lavender crop top and skirt teamed with white high heels.

After the event she took to Twitter to thank all the fans who came out to support her perfume project.

She tweeted: ''Literally heading home with tears in my eyes!! thank you babes for making today so beautiful. u have no idea just how seriously loved u are! (sic)''