Actor Armie Hammer Was Left Red-faced On Tuesday (28jul15) After Inadvertently Sharing Nude Photos Of Himself With His Hairstylist As He Gushed About His Baby Girl. 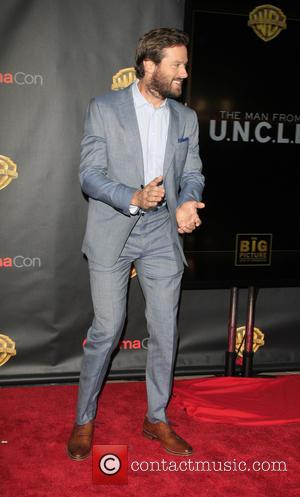 The Social Network star became a first-time father in December (14), when his wife Elizabeth Chambers gave birth to their daughter Harper, and he proudly showed off pictures of the tot as he was getting his hair cut before an appearance on U.S. talk show Jimmy Kimmel Live!.

However, it was only after he had been flipping through the images on his phone that Hammer realised the snaps revealed much more than he had intended.

He explains to host Jimmy Kimmel, "I found out today that I have nude pictures on my phone, I'm not kidding. I went out to get a haircut, 'cause this is a special occasion, I'm gonna be on the Kimmel show, so I went to get my haircut and then (I) said, 'I just had a daughter,' and she said, 'Do you have any pictures of your daughter?' I said, 'Of course, I've got tons of pictures.

"And I'm going through my phone and there's pictures of my daughter and I get to pictures where she's sitting in the sink and she's kinda lounging up on the sink and she looks like she's having the time of her life. I'm showing her these pictures, I go, 'Look at how cute she is, we're in the bathroom, she's just right in the bathtub.'

"After showing her these pictures for about 30 seconds, I realise I'm standing fully nude in the mirror of this bathroom. As quickly and casually as possible, I went, 'Anyway, you get the picture.'"

Luckily, Hammer reveals he was saved from further embarrassment as the hairdresser made no mention of the extra exposure.