The star of The Lone Ranger reveals where a large chunk of the $250 million budget went. 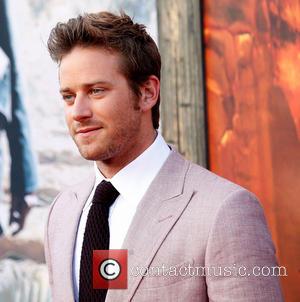 The Lone Ranger, Disney’s brand new riff on the classic western, had its glamorous premiere at the California Adventure Park this Saturday. But while the end result may have had all the glitz and glamour of a Hollywood premiere, the film’s star Armie Hammer explained that everyone had to get down and dirty during production. More importantly, the film, which bears the whopping pricetag of $250 million, was filmed entirely on location – with several towns, five miles of train track and two steam engines being created especially for the production.

"It was really helpful. It was the difference between standing in the middle of the desert looking at some of the most beautiful scenery you can point a camera at and standing in an air conditioned room at some studio going, 'This is a lot of green fabric,'" he told The Hollywood Reporter on the red carpet, adding: "It just made it that much more real, and hopefully, the audience feels it as well."

He also had a few kind words to add about his co-star, Johnny Depp. The partnership between Hammer’s John Reid (the Lone Ranger himself) and Depp’s Tonto is a key part of the film and apparently the actors worked as well off camera as their onscreen partnership made it seem. "He's such a great guy. Nicest guy in the world. He's fantastic," said Hammer.

But the funniest piece of trivia about the production, has to be the “cowboy camp” that all the stars had to attend, in order to learn how to properly ride a horse, throw a lasso – all of the classic cowboy skills. Hammer, who has grown up on a farm, reportedly had more experience with these tasks, but he didn’t manage to completely skip out on camp. "I did. We all went to cowboy camp," he confirmed, adding with a smile. "But don't worry - I'm a pro."

If this Gore Verbinski-helmed western has caught your eye, you can watch the film in theatres from July 3.

Take a look at more pictures from the premiere: Hammer (left) and Depp (right) enjoyed working together on the New Mexico set.