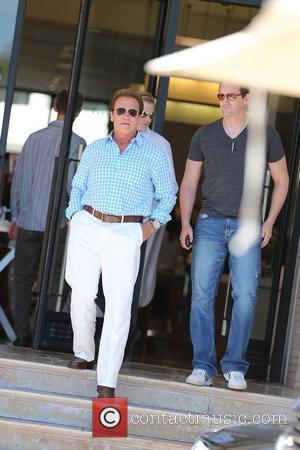 Arnold Schwarzenegger has confirmed that he and Danny Devito are working on a sequel to their 1988 comedy classic 'Twins', in which they played non-identical twins conceived in a botched genetic experiment. The movie was directed by Ivan Reitman, who Arnie subsequently teamed up with for 'Kindergarten Cop' and 'Junior'.
Speaking at the press conference for 'The Expendables' at Comic-Con on Thursday (July 11, 2012), Schwarzenegger confirmed that Universal Pictures has green-lit the project, saying, "I think they have moved it along, and Ivan Reitman has shown interest in being involved. Universal is excited about it. I'm looking forward to doing it, because I think it will be hilarious". The former action-star, turned Governor of California, also revealed that the team are still looking for a writer. Earlier this year, it was rumored that the sequel would be named 'Triplets', starring Eddie Muprhy as the brother's long-lost sibling. Speaking to London's Evening Standard, DeVito said, "We're going to try and do it next year. Arnold and I find out we have another brother, played by Eddie Murphy. I don't know how it's going to manifest but it will be fun".
Schwarzenegger - who is making a movie comeback following the end of his political career - will next be seen in 'The Expendables 2', which opens in the U.S. and UK next month. DeVito is currently starring in 'The Sunshine Boys' at London's Savoy Theatre, while Eddie Murphy is still trying to assure fans that he is not dead, after a spate of Twitter hoaxes.