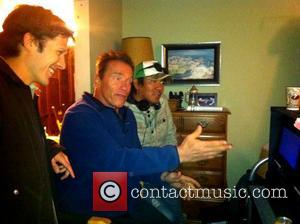 Picture: Arnold Schwarzenegger tweeted this image with the caption 'Just wrapping up a big day on The Last Stand with Zach Gilford and our great director,...

Arnold Schwarzenegger's lovechild showed he takes after his famous father by dressing as Conan the Barbarian for Halloween (31Oct11).
The movie star-turned-politician was mired in controversy earlier this year (11) when he split from his wife Maria Shriver amid claims he'd enjoyed a long affair with their housekeeper, Mildred Baena.
It later emerged the Hollywood hardman had also fathered a son, Joseph, during the affair - and the 14 year old made a playful reference to his dad on Monday by attending a Halloween party in California dressed as Schwarzenegger's musclebound character from the 1982 film.
Photographs from the event in Valencia show Joseph wearing a fur-lined leather tunic and a headband - and wielding an enormous sword.