R&b Star Ashanti Has Told A Court She Has "Never" Had A Relationship With A Man Who Has Been Stalking Her. 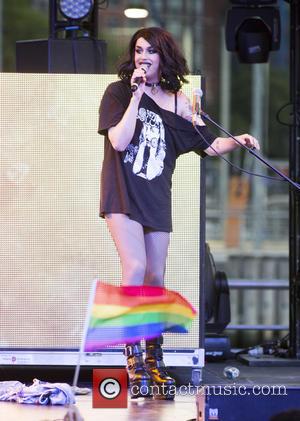 The Mesmerize singer was called as a witness at Manhattan Supreme Court in New York on Thursday (01Oct15) in the trial of Devar Hurd.

He is accused of breaching a protection order previously imposed on him by contacting the star and her sister Kenashia on Twitter.com.

Hurd is also said to have attended two events with the intention of befriending Kenashia, according to the New York Daily News.

Giving evidence on Thursday, Ashanti was asked if she had had "a romantic relationship with Devar Hurd" and replied, "Absolutely no. Never, ever."

She also told the court how Hurd harassed her and her family for years, adding, "I'm really nervous and scared of exactly what he's capable of doing to myself and my family."

Hurd was jailed for two years after he was convicted in 2009 of stalking and aggravated harassment for sending disgusting messages to Kenashia and the singer's mother Tina Douglas.

After his release from prison, he was banned from contacting the family but is now accused of breaking the restraining order in 2013.

Hurd, who is defending himself in the latest trial, denies breaching the order.