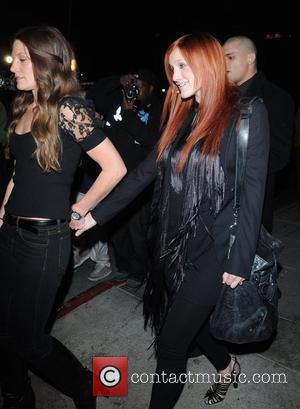 Pop star Ashlee Simpson-WENTZ and her rocker husband Pete Wentz dismissed reports of marital problems at the MTV Australia Awards in Sydney on Friday night (27Mar09) by puckering up for an onstage kiss.
New mum Ashlee made a surprise appearance onstage at the awards show and urged the crowd to "grab the person next to you" before planting a lengthy smooch on her husband's lips.
Fall Out Boy star Wentz eventually broke away from the clinch and told the audience, "Sorry, we haven't seen each other in a while. We're going to go and find some quiet time and fornicate somewhere."
The couple will celebrate its first wedding anniversary in May (09).
The night only got better for Wentz when his band claimed the Best Rock Video prize for their promo I Don't Care.
Pop star Pink claimed the Best Video award for her smash hit So What, while Katy Perry was named Breakthrough Artist.
Britney Spears' comeback has proved a hit with fans Down Under too - she won the Best Moves accolade for her energetic dance routines, while former Australian Idol Jessica Mauboy picked up the award for Favourite Aussie, and local rockers Sneaky Sound System took home the Independent Spirit award.
The ceremony, opened by The Killers, also saw performances by Kaiser Chiefs and The Fray, as well as a surprise set by 1990s rapper Vanilla Ice, who wowed crowds with his 1990 hit Ice Ice Baby.