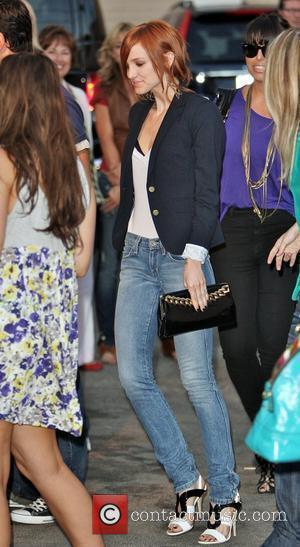 Ashlee Simpson-WENTZ has waged war on blogger Perez Hilton after he published a story alleging she started a drunken fight with her husband Pete Wentz.
The gossip-monger reported on Sunday (16Aug09) that the pop star was involved in a public argument with the Fall Out Boy bassist at the one-year anniversary of his Chicago, Illinois bar, Angels & Kings.
Hilton cited multiple witnesses who informed him that Simpson-Wentz had been "completely wasted" when she approached her husband at the DJ booth, forcing him to leave his party.
In the entry, Hilton also asked, "Are they on the brink of divorce?"
But the 24 year old refused to allow the reports to go unaddressed, taking to her Twitter.com page to blast Hilton.
The singer first proved her affection for her husband by writing a personal message to him: "I had so much fun with ur (your) parents last night. Thanx (sic) for dedicating the DJ set to me. Love you more magic. I miss u (sic) already."
She then directed notes at Hilton, ranting: "When all you do is make up untrue stories - look in the mirror. Do you even feel human? Karma is a b**ch. Your story is WAY off."
Hilton then fired back his own defence, insisting, "I don't wanna (sic) name names and get people fired but several of the people I spoke with work at Angels & Kings. I'm not wrong."
But the singer had the last word in the matter, replying, "WRONG. My husband is an amazing DJ and was dedicating songs to me. We were just havin (sic) fun. Our love is amazing. Get ur (your) own life."