There's a lot of talent on-screen in this British crime drama by editor-turned-director Andrew Hulme, but the film never quite resolves itself into something meaningful. Characters are unlikeable, events are under-developed and the setting is simply too cliched to ever properly spring to life. But it looks terrific and plays loosely with some seriously pungent themes. It's set, of course, in East London, specifically in the crime-ridden area of trendy Hoxton, where gangsters Micky and Jimmy (David Spinx and Martin Askew) are duelling for control. Caught in the middle is young Dave (Frederick Schmidt), whose late father was the respected boss. Dave aspires to that kind of greatness, but doesn't have the smarts to achieve it. He takes a delivery job for Jimmy, his dad's brother, and drags his unwitting pal Tariq (Aymen Hamdouchi) in without telling him that they're delivering a bag of drugs. Even worse, Dave steals a brick of cocaine thinking no one will notice, then proceeds to snort and smoke it all. When Tariq goes missing, Dave turns to Micky, his dad's best pal, for help. As tensions rise, Dave's girlfriend Theresa (Claire-Louise Cordwell) suggests they run away, but while looking for Tariq in the local mosque, Dave has become intrigued by the peaceful atmosphere there.

Even with all kinds of intriguing things swirling around, the script merely drifts into yet another cautionary tale about the dangers of drug abuse and crime. Dave isn't the smartest guy in any room, and idiotically thinks he can handle it even as everything around him spirals out of control. Even his foray into Islam feels ignorant, as Dave clearly hasn't a clue what the religion means. He just likes being in a quiet place surrounded by people who seem to like him for a change. Schmidt plays him with a lot of on-screen charisma, bringing out Dave's misplaced confidence: he knows he's sexy and can get pretty much whatever he wants. But he's such a simpleton that he's impossible to root for.

Sam and Fordy are young students who think of themselves as entrepreneurs in the business of credit card fraud. They and their friends are making a lot of money already, but it's a stressful business - they introduce glamorous new recruit Frankie into the group; a data processor for a credit card company who could prove to have the inside knowledge needed to make their money making schemes a hell of a lot simpler. They go oversees to scam some of the world's biggest billionaires, but it isn't long before one 'victim' catches up with them. An infamous gangster named Marcel finds them and threatens to kill them if they do not pay him a debt of $2 million in two weeks. Their lives now hanging in the balance, the group need to a license to print money if they want to make it - unless they can pull of a major jewel heist between them. However, with a potential fortune to be made, will their greed overcome their friendships?

'Plastic' is a crime drama based on a remarkable true story. It has been directed by Julian Gilbey ('A Lonely Place to Die', 'Rise of the Footsoldier') who co-wrote the screenplay alongside Will Gilbey ('Doghouse', 'Just for the Record') and Chris Howard (producer of 'Get Lucky'). It is scheduled for UK release on May 2nd 2014. 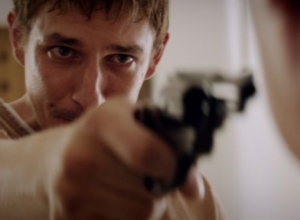 There's a lot of talent on-screen in this British crime drama by editor-turned-director Andrew Hulme,...