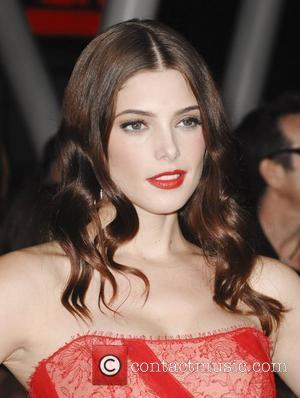 Ashley Greene 's 'Twilight Saga' character is known as "the hottest vampire of them all" apparently; it's a slightly unimaginative nickname for the actress, sure, but it was hard to disagree with after she dazzled at the premiere of the fourth instalment of the film adaptation franchise, upstaging even the ever glamorous looking Kristen Stewart.
The premiere for 'Twilight Saga - Breaking Dawn Part 1' took place in Los Angeles last night (November 14th) and Greene looked stunning, reports Celebuzz, wearing a red gown with gold waves in it, her face made up with bright red lipstick as she blew kisses to the thousands of fans who'd turned up to pay homage to the hugely successfully film series. Away from the red carpet, Greene has been talking to CNN about her ongoing hair changes throughout the four films - she's had a different style for each - and said of the latest one, "when [director] Bill Condon came in, I said, 'You know, this is the idea I've always had for Alice,' and he was kind of on the same page, and so we moved forward and worked with really incredible hairstylists to kind of create the look that he and I had always envisioned for Alice."
The 'Twilight' screen adaptations began in 2008, with the first film grossing over $392 million worldwide; follow up film 'New Moon' took the highest grossing midnight opening in 2009 with approximately $26.3 million going to the box office - something that was again beaten by successor 'Eclipse' on its way to grossing a phenomenal $709 million worldwide.