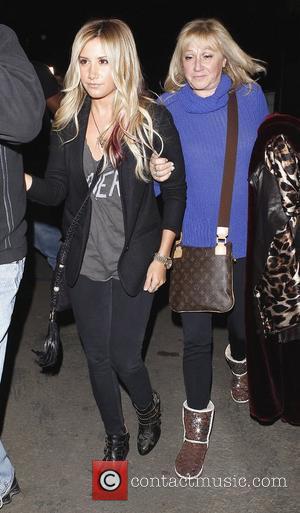 Picture: Ashley Tisdale and her mother Celebrities arrive at The Hollywood Bowl to watch Coldplay in concert Los Angeles, California - 04.05.12

Ashley Tisdale and her director boyfriend Scott Speer have reignited their romance after a four month break. The High School Musical star, 26, split with Speer earlier this year though the pair have decided to give their romance another chance, reports US Weekly magazine.

A source close to the couple said, "Ashley is doing great again.She is back with Scott now. They had a good thing going". Following their surprise break-up, Tisdale began a brief romance with the Boys Like Girls lead singer Martin Johnson - whom she first met on the set of their music video 'Love Drunk' in 2009. In addition to her reignited relationship, the actress is also enjoying a career comeback, with Bravo picking up her docu-series Miss Advised, about relationship experts. ABC Family have also signed a development deal for Tisdale's detective drama 'The Keys', made by her company Blondie Girl Productions. A source added, "She is thrilled her pilot got picked", while boyfriend Sperry tweeted, "Congrats! Blondie Girl is taking over!" on May 8, 2012.

Tisdale began her career playing Maddie Fitzpatrick in Disney's 'The Suite Life of Zack & Cody', before getting her big break as Sharpay Evans in High School Musical. She's also tasted success in the music business, and entered the U.S. Bill Board at No.5 with her debut record 'Headstrong' in 2007.