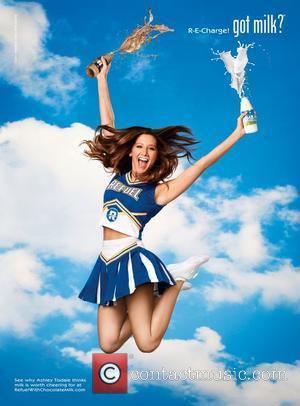 Picture: Ashley Tisdale unveils her first solo Got Milk? advert at The Grove. The ad forms part of the Be Strong Challenge. Hollywood, California - 30.08.11...

Former High School Musical star Ashley Tisdale has launched a new cheerleading challenge to find America's top squad.
The actress, who played cheerleader Sharpay Evans in the hit Disney film and TV series, has channelled her onscreen character and stepped in front of the camera for the Got Milk? campaign.
And, as part of the project, Tisdale has launched the Be Strong Challenge - a quest to find a strong-willed cheerleading squad, which uses milk to stay at the top of its game.
She says, "I definitely have an appreciation for cheerleaders. I was on a show where I had to be a cheerleader, I did Pop Warner (youth cheerleading) when I was younger. And it takes a lot of energy, and a lot of hard work... The Be Strong Challenge is really cool. Cheerleading squads get to upload videos of a custom cheer, showing them how they can be strong with the Got Milk? campaign."
The winning team will receive $5,000 (Gbp3,125) and front their own Got Milk? ad, which will be featured in U.S. publication American Cheerleading Magazine.
Tisdale dons the famous 'milk moustache' for her new Got Milk? ad and says, "Being an athlete, I work out all the time, and my trainer told me, 'Chocolate milk is the best (way) to refuel after a work out.' It keeps your energy up, it's got a great balance of protein and all the great nutrients."
Ironically, California schools are currently locked in a debate about whether or not to pull chocolate milk from lunch menus.