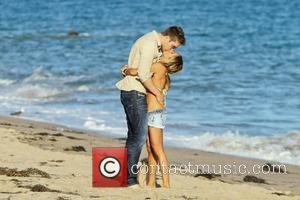 Picture: Ashley Tisdale shares a tender moment with boyfriend Scott Speer as she celebrates her 27th birthday on the beach in Malibu Malibu, California - 02.07.12

Sparks were certainly flying as Ashley Tisdale threw a Fourth of July birthday bash on Monday (July 2, 2012). The bikini clad star rang in her 27th birthday on Malibu beach with her boyfriend Scott Speer and a couple of famous friends, reports the New York Daily News.
Tisdale and Speer were snapped frolicking in the sands, with the 30-year-old planting a kiss on his Disney girlfriend. The couple reunited in May after initially calling time on their relationship in December. Speer works as a music video and film director, recently helming 'Step Up Revolution'. The beach was awash with celebrities, including Vanessa Hudgens and boyfriend Austin Butler, who both attended the bash, as well as Justin Bieber's girlfriend Selena Gomez, who also joined in the celebrations. As night drew in, the whole gang relaxed around a beach bonfire, with Tisdale tweeting a snapshot and telling followers, "Magical night at the beach! Birthdaygirl".
Tisdale will next play a high priced escort girl on the fifth season of FX biker show 'Sons of Anarchy'. While on set last week, the actress tweeted her excitement at hopping in front of the cameras once again, saying, "'Doing 2 episodes! So excited because it's my favourite show!". The Weinstein Company recently announced she would also be starring in the much anticipated comedy-horror 'Scary Move 5'.