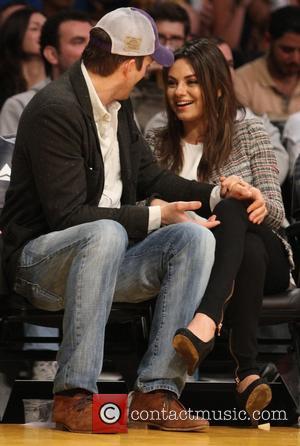 Ashton Kutcher and Mila Kunis hosted a Kabbalah blessing for their newborn daughter, Wyatt Isabelle, over the weekend (03-05Oct14).

The Two and a Half Men star and his actress fiance welcomed their first child into the world on 30 September (14).

Editors at Britain's The Sun newspaper report that Kutcher's ex-wife Demi Moore attended the ceremony with her two daughters, Rumer and Tallulah Willis.

It is thought Moore gifted the pair with an engraved photo frame and a personalised cashmere blanket.

A source tells The Sun, "Demi and her daughters congratulated the couple while having a quick hold and coo over the baby. It was great to see her doing so well and at ease with Ashton's new life as a father and fiance."

Kutcher has been a student of Kabbalah for several years.