Ashton Kutcher leaves wife Demi Moore romantic Post-It notes around the house to prove how much he loves her. 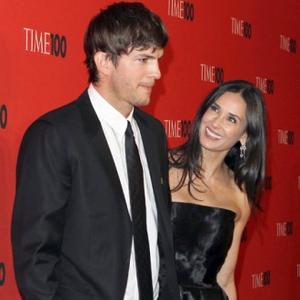 The actor - who married the 'Ghost' actress in 2005 after two years of dating - thinks it's important to let his spouse know how much he loves her, and the pair refuse to throw away the messages of encouragement and praise.

Demi said: "The type of romantic is, you go to our house, I have Post-It notes placed in various locations, all with messages of encouragement or love or just thought. Some have been there, I don't know, seven years.

"They're all my favourite but my most recent one was just a reminder that I was magical."

Ashton then quipped: "Post-It notes are much cheaper than diamonds."

As well as being romantic, Ashton - who, at 33, is 15 years younger than his spouse - says it's important to work at a marriage and not let things go stale.

Ashton - who has launched a child-sex-trafficking awareness campaign, Real Men Don't Buy Girls, with Demi - told 'Piers Morgan Tonight': "It's working on the relationship when the relationship is good. As marriage goes, I think people set 'getting married' as the goal as opposed to being married. Working on it when it's really good, not letting it go flat and finding things to work on together...Like this project we're working on, it's the two of us in the trenches every day...We argue and we're both alpha-individuals...But we know what the big goal is, to transform the quality of life for people."