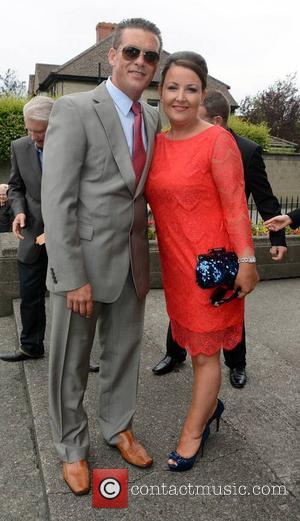 Picture: Rodney O'Brien and Adrienne Kelly - Aslan frontman Christy Dignam gives away his daughter Kiera Dignam at Our Lady Help of Christians Church on the...

A huge Aslan gig in Ireland set to welcome frontman Christy Dignam back to the stage has been cancelled because he is still too weak from his cancer battle.

The 52-year-old star was diagnosed with blood cancer in March (13) and he was set to reunite with his band onstage at the O2 venue in Dublin next month (Dec13), but they have called it off as Dignam continues his recovery.

His bandmate Billy MCGuinness tells the Irish Herald, "Christy would try it if we let him, but as he puts everything into his performance, it's too much of a risk.

"His energy levels are low and we simply don't think Christy has the strength to be on stage. Christy is very positive but we are not making a move until the results of that scan come back."

Dignam has been undergoing chemotherapy treatment since his diagnosis.

Aslan - Made In Dublin