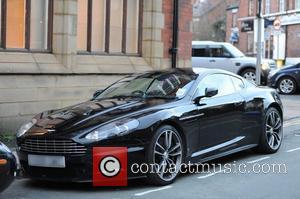 The driver of the Corsa reportedly lost control of the car at a roundabout, just after driving out of the Esso garage. The car went careering onto the petrol station forecourt and ploughed straight into the side of the James-Bond style sports car, leaving the owner fearing that it may be a write-off. “She drove out of the petrol station onto the roundabout, lost it, and came over the kerb and came straight into the car,” said the owner of the Aston Martin, who wished to remain anonymous. “My car moved into the pump and bumped the pump off. It will be a write-off. They won’t fix that.”

It certainly makes for a sorry sight, the bright and cheerful pink Corsa, with its nose stuck in the side of the £180,000 luxury vehicle.

A passer by also commented “She lost control on the roundabout and span around and into the petrol station. It all happened so fast.” It’s unclear whether the recent icy conditions that have blighted UK roads were a factor in the crash, or not. A Flashy Aston Martin, Similiar To The One That Suffered The Smash In Swindon.