Just what was Aubrey Plaza trying to do when she interrupted Will Ferrell's MTV Movie Awards acceptance speech? 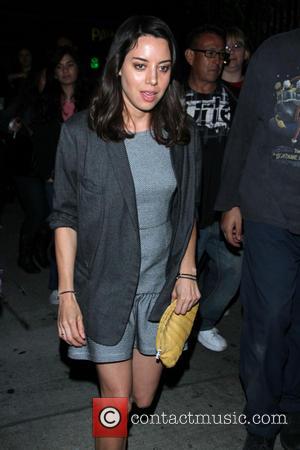 What exactly was running through Aubrey Plaza’s mind, do you think, when she decided to get onstage and ‘Kanye’ Will Ferrell’s MTV Movie Awards acceptance speech? Who cares! It was hilarious. In fact it was just as funny as anything Will Ferrell has ever done, and possibly a little more daring. To set the scene; Ferrell was accepting his Comedic Genius award from his Elf co-star Peter Dinklage and was in the middle of giving his acceptance speech, when Parks and Recreation star Aubrey Plaza rocked up onstage an Kanye’d his moment.

We are referring, of course, to the time that Kanye West interrupted Taylor Swift’s acceptance speech at an MTV Music Awards, a moment that Aubrey was clearly referencing, as she walked silently up to Ferrell and attempted to prise his ‘Golden Popcorn’ award from his hands as he spoke. Will wasn’t about to give up his award that easily though and after an awkward couple of moments as she looked into his eyes and grasped at his trophy, she walked away, as silently as she had arrived. Plaza then returned to her seat, spilling her drink as she went. She may not have said much but it’s become the most talked-about moment of the awards. Plaza also had the words The To Do List emblazoned on her chest – that’s the name of her new movie, in case you were wondering. On Twitter, Plaza even thanked Kanye for his supposed ‘advice.’

thanks for the advice @kanyewest went better than planned! #mtvmovieawards #chrisbosh #thesecret

Luckily Ferrell was pretty relaxed about the whole things and commented backstage “"I think she wanted to tell me something important, but there was no message," he said. "It was just a lot of hot liquor breath. And then ... and a little bit of sweat. And then she ran away. But the ship sailed on."