French rockers Austerlitz release their extremely ambitious, experimental, self-recorded debut studio album. In fact, ambitious is hardly the word. It's actually borderline eccentric but this isn't necessarily a bad thing. It's rock music with an interesting twist; a more calm approach. It borders the rock fringe, feeling quieter and softer than other rock music. 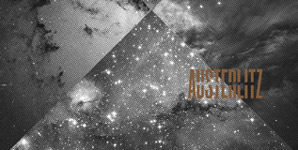 Recording an album themselves is a bold move that occasionally pays off for the artist but that yet remains to be seen with this release, because it has a bigger issue surrounding it. Austerlitz has gone further than just writing an album to make music. If one researches Austerlitz slightly, they discover that one of the album's main features is that none of the songs are written in a constant time signature. For those not musically-minded, this means that one cannot count "1, 2, 3, 4" along with the song, because one would go out of time eventually. Austerlitz claim that music that sticks with these regulations and other similar ones are constraining their music and not letting it be as 'free' as it could be and the effect, though in places slightly unnerving, isn't a bad one. The band themselves claim that this makes the music 'asymmetrical' and one can see what they mean by this but to the untrained ear, it isn't as noticeable as Austerlitz seem to think it is. To those who have no idea what a time signature is, it would still sound like 'normal' music. The lack of a constant time signature isn't present to those who aren't looking to notice that it's missing.

The other issue surrounding the time-signature feature is the fact that one who is aware of the lack of time signature is then constantly noticing it. This is really quite distracting; it's hard to think about anything else about the album. So Austerlitz have managed to, in a way, alienate everyone by choosing to ignore generic musical constraints. Those who are aware that this is the case constantly notice it, whether they like it or not and those that don't are missing what could be said to be one of the main features of the album, a feature that Austerlitz promote with gusto.

Happily however, there are some redeeming features about the album. It's very well recorded; it is of a decent quality despite the fact that it is self-recorded rather than through a label. The music is pleasant, if a little bit tedious at times; it manages to get quite 'samey' as the album progresses. The chilling, slow and haunting vocals, good use of guitar effects and, yes, the erratic time signatures all come together very well to create something very, well, different but not necessarily bad. It most definitely won't be to everyone's tastes but some indeed may enjoy the sound. For this reviewer though, 4/10.