"one of LA's most promising young bands Autolux has taken the grace and energy of '90s indie rock and added artful electronic fuzz and flourishes that recall Sonic Youth, Can and the Jesus and Mary Chain." - LA Times

" the freshest thing to have come out of LA in far too long they deliver post-psychedelic noise-pop that's positively captivating." - Alternative Press

Redefining what noise means within the context of pop, Autolux doesn't believe in boundaries when it comes to experience and expression. It's been a good decade since a band with this much musical depth, melodic diversity, and straight-up style has driven through our world.

If you're a club-going Los Angeles native, there's a very good chance you've already been one of many in a crowd clamoring to see Autolux. But for the rest of us, they are a refreshing new band with a singular sound. Autolux is Eugene Goreshter (vocals/bass), Greg Edwards (guitar/vocals), and Carla Azar (drums/vocals). Although they have garnered comparisons to My Bloody Valentine, Sonic Youth, Mercury Rev, one really can't compare them with ease.

They've performed live with a diversity of acts like Blonde Redhead, Girls Against Boys, The White Stripes, Broadcast, and most recently Tortoise for a reason - Autolux exists in their own luscious little bubble. Enter Future Perfect.

In 2002, Autolux signed to DMZ, a new label created by the Coen Brothers and T Bone Burnett. Future Perfect was produced by T Bone Burnett, and mixed by Dave Sardy 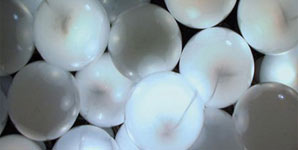