Grown-up Child Star Avan Jogia Fears The Producers Of His New Epic Mini-series Tut May Have Hired A Crook To Wrangle Snakes On The Set - Because He's Sure The Guy Simply Rounded Up Cobras He Brought With Him. 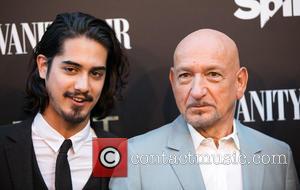 The former Victorious star admits he was relieved to hear a snake expert had been hired to patrol the set every morning before filming started in the Moroccan desert, but he's now not convinced the movie bosses needed to pay for his services.

Jogia says, "He kept on catching snakes - he caught, like, four snakes a day... But the thing is... I think this man brought snakes."

The actor spent four months shooting the Egyptian-period drama in the desert and was rewarded for all his efforts by director David Ayer with a trip to Paris, France to soak up ancient exhibits at The Louvre museum.

He says, "It was really amazing to sit there with something that's three thousand years old; you just feel dwarfed by, like, the greatness of the nation."

Tut Star Bled All Over Castmates After 'Silly' Desert Fall