Since breaking through with 2002's 'Let Go', Avril Lavigne has sold a reported 30 million albums as guitar music's answer to Britney Spears. Her last album, 'The Best Damn Thing', was released four years ago and she has amongst other things in the interim period launched a clothing line and perfumes, but now she returns to the medium of her original success. 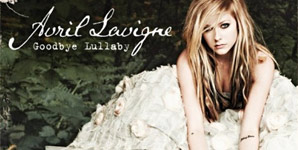 Mooted by Lavigne as the record on which she crosses to an adult audience, 'Goodbye Lullaby' begins with the tender 'Black Star', a short piano track full of wistful optimism. It is followed by lead single 'What The Hell', a track of such immature yet infectious energy it resembles her annoying previous hit 'Girlfriend'. Thankfully 'Push' is an immediate improvement, an electro-acoustic mid-tempo anthem on the tribulations of making a relationship work, while the following 'Wish You Were Here' is nearly as impressive a simple yet effective hook. 'Smile' has an uplifting chorus but is spoiled by embarrassing verses that fall well short of funky, and it is at this point that the album loses momentum. The likes of 'Stop Standing There' and the soulful '4 Real' are pleasant enough without rising above mediocre, but 'Darlin'' and 'Goodbye' are turgid attempts to show off a vocal scale that Lavigne has understandably never been recognised for. After such a promising start, 'Goodbye Lullaby' turns out to have overloaded its first section with the quality tunes, leaving the latter part struggling in comparison. It isn't the redefinition of Lavigne as an artist and won't see her battling at the top table of music's divas, but it's progression from her previous work may actually see her keep touch with her ageing original fan base.