Axl Rose injured his leg on a wild weekend in Moscow, pulling a hamstring and suffering severe bruising. 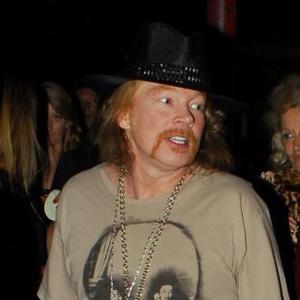 Axl Rose injured his leg on a wild weekend in Moscow.

The Guns N' Roses frontman slipped and pulled a hamstring, suffering severe bruising after partying following the band's gigs in the Russian city on Friday (11.05.12) and Saturday (12.05.12).

He posted a picture of his injury on twitter with the caption: ''Can U say HemaToma? (sic)''

A haematoma is a build-up of blood under the skin, and in severe forms has to be drained.

A source told The Sun newspaper: ''Axl needed medical attention for a nasty leg injury and was unable to fly [out of Moscow] with the rest of the band.''

However, Axl is expected to make tonight's (17.05.12) Dublin show in Ireland before performing in Nottingham, Liverpool, Newcastle, Glasgow, Birmingham and Manchester and London in England over the next two weeks.

Axl is the only original member of Guns N' Roses and tours with a new line up of the group featuring Tommy Stinson, Chris Pitman, Richard Fortus, Frank Ferrer, Ron 'Bumblefoot' Thal and DJ Ashba.

Last month Former Guns N' Roses drummer STEVEN ADLER said he was ''done'' with Axl after the frontman declined to appear with the 'classic line up of the band as they were inducted to The Rock 'n' Roll Hall of Fame.

He said: ''I'm done with him, I'm never mentioning him or talking about him again. That's it.