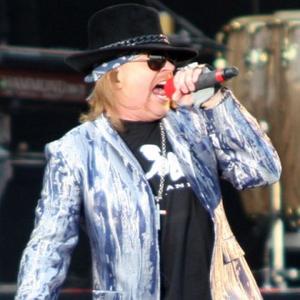 The band's original bass player, Duff, joined singer Axl onstage halfway through the band's show at the O2 Arena in London to play bass on the track 'You Could Be Mine'.

He was met with rapturous applause from the crowd, and subsequently introduced by Axl - the only original member of the band still in the group - who said: "There was this guy at the end of my hallway playing all this loud music and shit. And I was all like, what the f**k? Oh - it's Duff!"

Duff later returned to play rhythm guitar on the tracks 'Nice Boys' and 'Knocking on Heaven's Door', and tambourine on encore song 'Patience', as well as taking a bow at the end of the concert with the rest of the band.

A onlooker at the show told BANG Showbiz: "Duff looked good, he arrived unannounced and completely unexpectedly. There wasn't much direct interaction between him and Axl, but he seemed to be enjoying himself and relaxed with the rest of the band."

Duff left the band in the mid nineties toward the beginning of the 14 year period which it took to record and release the band's ill fated 'Chinese Democracy' album. He, along with guitarists Slash and Izzy Stradlin, Axl, and drummer STEVEN ADLER are considered the 'classic' line up of the band; who were propelled to worldwide superstardom after releasing the seminal 'Appetite For Destruction' album in 1987.

Izzy has previously appeared onstage with the band as recently as 2006, but a full scale reunion is unlikely due to personal differences between Axl and Slash.

Axl has previously said of the band's ex-guitarist: "One of the two of us will die before a reunion. However sad, ugly or unfortunate anyone views it, it is how it is."

He has also said: "I could see doing a song or so on the side with Izzy or having him out on tour again. I'm not so comfortable with doing anything having more than one of the alumni. Maybe something with Duff, but that's it."

The band finished their two and a half hour set last night in a storm of glitter with the track 'Paradise City'.

Fans who were at the show are being encouraged to upload their photos from the concert at American Express and Channel 4's My Live Story site, which can be accessed at http://www.channel4.com/explore/mylivestory/