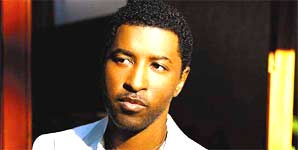 Babyface
Sorry For The Stupid Things

He has sung his way into the upper tiers of the soul elite, and produced scores of remarkably moving, high-quality hits. But for Babyface, the cool craft of artful songwriting is never far from his mind or his heart.

"The main thing I've tried to stick with," he says, "is the song, and what a likeable song is. That's something that has a verse and a lyric that is memorable, and a chorus you want to sing again. At some point -- the bridge, normally -- it all grows. When everything works, these elements give you a good feeling throughout the whole song."

Good feelings have always distinguished Babyface's music on both his own recordings and on those the Indiana-born Los Angeles resident has helped create for others. But on Grown & Sexy Babyface stretches his superior song command into areas he has rarely explored in the past. And those places, counter to the romantic serenity or sadness that mostly have characterized Babyface's previous work, are sometimes short of paradise.

'I didn't just write this time about the wonderful part of being in love," he says. "I wrote a little bit more about the drama. Interestingly enough, although I haven't done this so much for myself, I have done it working with other artists. I wasn't interested in wall-to-wall negativity -- that's not who I am -- but this time, for me, ultimately, the collection ended up portraying drama as well as contentment. It was cool."

It's not as though Babyface might settle for an incomplete story about anything these days. "Grappling with problems, that's just being responsible," he says. "And that's part of the way this album feels to me. It's a grown record. And grown is sexy right now. You're tired of running around, you're tired of trying to do everything else except be who you are. You're thirty-something? You're forty-something? Embrace that, because the truth is, it's the best time of your life."

Grown & Sexy opens with exactly such a seize-the- day sentiment. Except, it unfolds within an incomparable acoustic-flavored groove at night in the bedroom. "We're in the final rounds," Babyface sings in 'Tonite It's Goin' Down,' a man interested in, as he puts it, "making babies."

Other songs, though, usher in less harmonious auras. "You can take your Usher CD," spits out the guy in "Goin' Outta Business," beginning to detail severely bruised feelings, allegations of lies, and arguments about the cable bills. It's a brilliant extended metaphor about the end of a love affair, set to a fluid yet appropriately disrupted rhythm that jerks a little in places. "That's just one of those clever ways of saying it's over," Babyface says of the song. "Sometimes a fool doesn't know he's a fool," he sings with contrasting directness in the album's lead single "Sorry for the Stupid Things," a soaring mid-tempo ballad where a man apologizes for "all the drama" he creates in his woman's world.
"When the going gets tough," Babyface sings in "Drama, Luv & 'Lationships," another terrific groove that investigates the whole syndrome of what its title references, "you deal with it. You don't have to share your problems with the world," he says, "but you do have to be honest with yourself, and deal with whatever you got to deal with. That's what keeps you grown, but also keeps you young as well," he says. "You don't close the door, grab your own records and don't listen anymore. You have to reach out."

All these songs occur in an evolved romantic world perhaps best evoked in the album's title song, where Babyface argues to a woman that his grown aesthetic stacks up pretty damn well against that of his competition for her affections, a narcissistic playa. "Bet he don't even know your number," Babyface charges. "Got you on auto-dial." Babyface strikes a scintillating balance between classic songwriting and a modern vibe on "Grown & Sexy."

A couple of ballads -- "She," written about his wife and son, and "The Loneliness," with its intense melodicism - skirt the high drama. On the elegant "Mad-Sexy-Cool," a man becomes so impressed thinking about an ultra-together woman who "brings no drama to the game" that he finally just wonders "How does someone turn into you, girl?"

"I'm a classic songwriter," he says, "when I listen to music from 20 years ago or more, it's amazing. Starting from rock and roll to jazz, to soul music, there's nothing richer than the music that has been created in America."

With its contemporary flourishes, classic structures, and outstanding singing, Babyface with Grown & Sexy offers a collection right in the tradition of greatness that he so appreciates. It is, truly, grown. It is never retro. "I don't want to go make a whole bunch of old records," Babyface says. "I want to be inspired and to create new things, new feelings."

Babyface - Sorry For The Stupid...

Babyface Its No Crime

Babyface - Sorry For The Stupid...