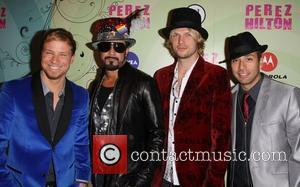 Backstreet Boys and New Kids On The Block have been hit with a lawsuit from a crew member who alleges he nearly died when he fell through a hole in the stage during the boy bands' joint tour.
William Wesley Styron was setting up for a concert at the FedExForum in Memphis, Tennessee in June last year (11) when he allegedly stumbled into an opening and plunged 13 feet (3.9 metres) to the ground.
In his lawsuit, Styron claims he fractured his skull and sustained "traumatic brain injury" after the drop.
The stagehand also maintains he suffered a "loss of consciousness, seizures, and convulsions" before an ambulance was called to take him to hospital.
Styron is adamant the accident could have been avoided and is demanding at least $5 million (£3.1 million).
According to Tmz.com, the pop groups have already dismissed the allegations, insisting it was Styron's fault for failing to watch his step.