Backstreet Boys have revealed plans for a special 20th anniversary show at the Fonda Theatre in Los Angeles on April 20. 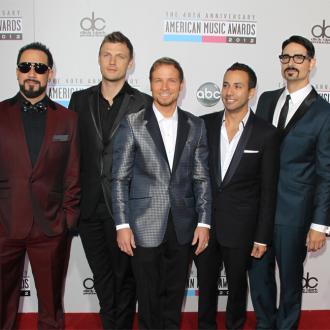 Backstreet Boys will celebrate their 20th anniversary with a fan celebration at the Fonda Theatre in Los Angeles.

The five piece - comprised of Brian Littrell, Nick Carter, A.J. McLean, Howie Dorough and Kevin Richardson, who rejoined last year after taking some time out - will host a special show for their supporters on April 20 at the famous Hollywood venue.

The tweeted: ''Ready to party BSB style on April 20th? We're having our 20th Anniversary Fan Celebration at the @FondaTheatre in LA, and you're invited...''

This will be followed two days later [April 22] by the unveiling of their own star on the Hollywood Walk of Fame.

To further celebrate the milestone anniversary, it was previously announced the band will release a documentary and have hired Katy Perry's 'Part of Me 3D' co-producer Stephen Kijak to direct the tell-all movie.

The group said: ''We always wanted to make a film and now is the ideal time. With Kevin back, the fact that we are masters of our own destiny, a new album in the works and our 20th anniversary - it all adds up to being the right time to share our story.''

Stephen has promised it will be a no holds barred look at the group and revealed their openness was one of the main reasons he wanted to work with them.

He said: ''What drew me to this project is their openness and willingness to push themselves into uncomfortable places, to be vulnerable and honest.''