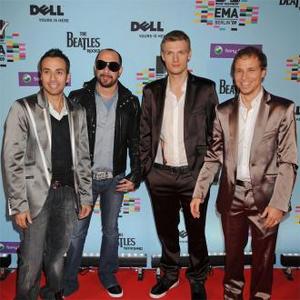 Backstreet Boys star Aj Mclean is expecting a baby girl with his wife.

The boy band member announced via his twitter page on Tuesday (03.07.12) that his spouse of eight months, Rochelle Karidis, will be having a daughter.

He later revealed to his hundreds of thousands of followers: ''Yay we're having a baby girl!!!!! Little baby Ava Jaymes.''

The 34-year-old singer also posted a video message to his fans on SocialCam.

He said: ''Thank you guys for all of your love and support. This will be the first Backstreet girl.''

He originally announced they were expecting a child back in April, more than two years after proposing to Rochelle in January 2010.

The special occasion took place during a live concert in Las Vegas, Nevada and they got married in December 2011 at the Beverly Hills Hotel in California.

Celebrity photographer Tyler Shields officiated the ceremony, which was attended by comedienne Kathy Griffin, plus his Backstreet Boys colleagues including Nick Carter.