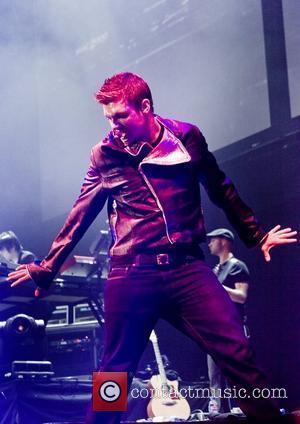 Backstreet Boys star Nick Carter feared bandmate Brian Littrell would not be allowed back into the U.S. when the singer started showing signs of swine flu at the airport following a flight from Japan.
The group was returning from a video shoot in the Far East when the singer fell ill and complained he was having trouble standing up as the band was walking through customs.
Carter recalls, "Brian was like, 'Dude, I do not feel good... My joints are hurting, my knees, I can't barely walk...' He kept saying it as we were going through customs.
"I'm like, 'Dude, just get through customs because I don't want you to get, like, quarantined.'"
Littrell later learned he had contracted the virus known as H1N1, and his fellow bandmates had to be screened for the illness - but luckily were given the all-clear.
Carter says, "I'm a hypochondriac as it is, so I just started freaking out. I was like, 'You need to get me on anti-biotics now, I don't wanna get it.'"
The bandmates and their entourage were then placed on lockdown in a New York hotel and all commitments, including a signing at the Hard Rock Cafe in Times Square, were cancelled.
Carter admits he felt awful for Littrell: "They locked him up in the hotel... He couldn't get food handed to him; they had to leave it at the door (of his room) and just walk away."
Littrell addressed his sickness in a video message to fans he posted on YouTube.com on Monday (05Oct09).