Nkotbsb London Concert To Be Screened Live To Cinemas

Backstreet Boys and New Kids On The Block's April 29 concert will be streamed live to 300 cinemas across Europe. 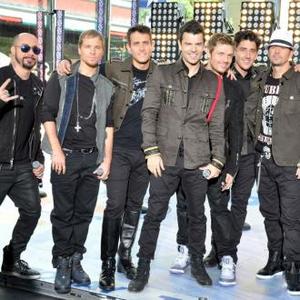 Backstreet Boys and New Kids On The Block's April 29 concert will be streamed live to cinemas across Europe.

The NKOTBSB show at London's 02 arena will make history by being broadcast to over 300 screens by Myscreenevent.com using the state of the art Pan-European satellite feed, which will stream the concert to fans in high definition.

Frank Volpe - who is coordinating the cinema cast - said: ''Working with New Kids on the Block and The Backstreet Boys is such a perfect opportunity to reach out to markets that already clearly enjoy the cinema experience and will highlight this groundbreaking development as a route all bands and artists will have the opportunity to embrace in the next ten years.''

NKOTB's Joey McIntyre has previously revealed he is excited about bringing the NKOTBSB tour from the US to Europe but said his band will not be ''messing'' with any of Backstreet Boys' tracks.

He said: ''We're very excited about bringing the tour to Europe. It's going to be a blast.

''Rather than having One Of Us come on for an hour and then having the other group perform afterwards we've made it one big, exciting, rollercoaster of a show. We start the show together, we end the show together and then we trade off, a song here, a song there. Each group feeds off each other.

''But fans want to hear Backstreet Boys sing 'I Want It That Way', they want to hear us singing 'The Right Stuff'. We're not messing with the hits.''

From April 2 buy tickets direct from the band's web and social media sites and from www.myscreenevent.com/NKOTBSB.