Millie Mackintosh was actually one of the best dressed at the BAFTAS, but the harsh London weather was not in her favour. 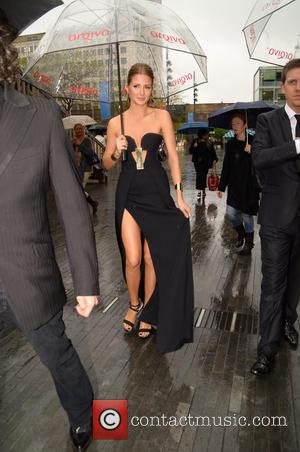 Made in Chelsea star Millie Mackintosh had a nightmare from start to finish during her BAFTA's red-carpet arrival on Sunday evening (May 12, 2013). The 23-year-old reality star wore a pretty stunning looking Sass & Bide black dress, though the waist-high slits proved problematic as the wind and rain battered the Royal Festival Hall in London.

"I'm wearing Sass & Bide, first time I've worn a Sass & Bide dress. I'm a little bit worried about walking in it because it's slit up to here. But I love the dress, and it's quite a different look from what I did last year," she told The Sun on the red-carpet. Millie, who is engaged to rapper Professor Green, was attending the show to support her E4 show which was nominated for Best Reality and Constructed Factual Programme. And guess what. It won!

The result was a little controversial, though Alan Carr beat Ant and Dec to best entertainment performance for Chatty Man, so anything's possible at the BAFTAs. Elsewhere, James Bond actor Ben Whishaw won leading actor for his performance in Richard II (The Hollow Crown), beating out Sean Bean and theatre legend Derek Jacobi, while Sheridan Smith won lead actress for Mrs Biggs ahead of Sienna Miller and Rebecca Hall. However, the night belonged to revered actress Olivia Colman, who won the BAFTA for both supporting actress (Accused) and female performance in a comedy programme (Twenty Twelve).

Broadcaster Clare Balding won a special award for her assured reporting from the Olympics, while Michael Palin was the recipient of this year's BAFTA fellowship. Millie Mackintosh At The BAFTAs Millie Mackintosh Having Dress Problems At The BAFTAs Millie Mackintosh Had All Sorts of Problems At The BAFTAs Millie Mackintosh Finally Gets Everything In Place At The BAFTAs