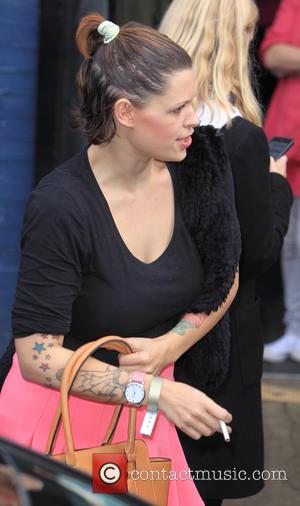 Picture: Fifi Geldof - Celebrities at the Sarm studios to record the Band Aid 30 single 'Do they Know It's Christmas'. The new Band Aid 30...

The star-studded Band Aid 30 rendition of Do They Know It's Christmas? has shot to the top of the U.K. singles chart after becoming the fastest-selling song of 2014 in its first two days on release.

Bob Geldof's charity anthem, featuring the voices of One Direction, Bono, Ellie Goulding, Rita Ora and Ed Sheeran, among others, shifted more than 206,000 copies and raised more than $1.6 million (£1 million) shortly after it went on sale on Monday (17Nov14), and has since gone on to outsell the rest of the top five combined with a first-week total of 312,000 units.

The impressive feat leaves Clean Bandit and Jess Glynne's collaboration, Real Love, to debut in second place, while Olly Murs' Wrapped Up with Travie MCCoy is new at three.

Sheeran's Thinking Out Loud drops to four, while David Guetta chalks up another big hit with Dangerous entering at five.

Meanwhile, One Direction have been given double the reason to celebrate after scoring its third consecutive chart-topping album in Britain with Four, ahead of Sheeran's X at two and Sam Smith's In The Lonely Hour at three.

Taking to Twitter.com to celebrate the news, singer Niall Horan writes, "Yessssss! What amazing news to wake up to ! Four has gone #1 onto the uk chart.

"Also the @BandAid30 single smashed everything else out of the park! So happy ... Today is a good day Thank you guys ! We love you soooooo much! The things you guys do for us is just unbelievable ! You sexy people (sic)".

The original Band Aid track raised millions for famine relief in Africa in 1984. Sales from the new version, the third released in the U.K., will benefit volunteer groups tackling the Ebola pandemic in West Africa.