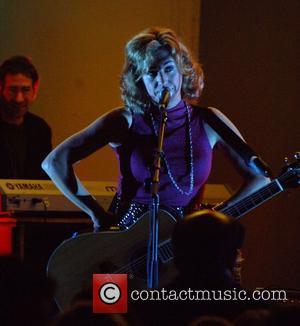 Picture: The Bangles perform at the Liberty Bowl Ojai, California - 09.05.08

They may have lived the rock'n'roll lifestyle during their 80s heyday, but THE Bangles insist they never seduced groupies.

The foxy foursome enjoyed a huge male following after storming the charts with hits WALK LIKE AN EGYPTIAN and MANIC MONDAY.

But singer Susanna Hoffs is adamant they were never tempted by lusty groupies.

She insists, "We liked to bring the cute guys backstage and chat and flirt but that was as far as it went."

But she confesses not everyone behaved themselves: "The male members of out crew were a different animal. There were beds on the tour bus that were being used like a brothel. I remember thinking, 'I don't want to sit on this coach with some of the stuff that's gone on here.'"

And she insists the girls did made the most of their lifestyle, adding, "I had some fun rock'n'roll moments. One time, VICKI (PETERSON) and I went to a bizarre after-hours LA underground club. We got in there had a few to drink, and for some reason decided to become go-go dancers for the night.

"It got pretty raunchy. We were up on the tables shaking our stuff and we got the crowd going crazy. It was a pretty wild night."

The Bangles - In Your Room Video

The Bangles - Be With You Video