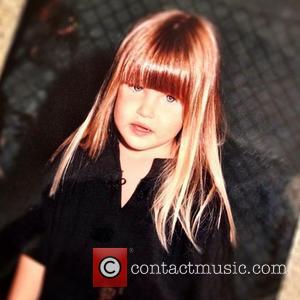 Picture: Bar Refaeli posted this image to Instagram with the caption 'Little B'

Bar Refaeli, the Israeli model and former girlfriend of Leonardo Dicaprio, has topped Maxim's Hot 100 list for 2012, it was announced on Tuesday (May 22, 2012). Though Refaeli has risen to become one of the world's most famous models, her entry at No.1 came as a slight surprise to some fans of the magazine on Twitter.
Perhaps the biggest surprise however was reserved for Lois Griffin at No.85. If you're not familiar with Mrs Griffin as a model, or actress, or even singer, that's because she's the matriarch of the 'Family Guy' brood - i.e, a cartoon character. She beat fifteen flesh and blood beauties to secure her place firmly in this year's list. Elsewhere, comedian and political commentator Stephen Colbert made it in at No.69, thanks to the public vote. Other notable entries included Miley Cyrus, who beat Sophia Vergara by three places to place 68th. The Top 10 was rather predictable, with Megan Fox at No.8, Emma Stone at No.7 and 'The Hunger Games' star Jennifer Lawrence in at No.6. The Top 5 featured Olivia Wilde, Katy Perry and Mila Kunis, but it was Bar Refaeli who fended off Olivia Munn to take the top spot.
Refaeli covered Sports Illustrated's Swimsuit Issue in 2009, and has since made several notable television appearances, including as a guest judge on 'Germany's Next Top Model', hosted by HEIDI KLUM.