Bar Refaeli has confirmed she's engaged to boyfriend of one year Adi Ezra after he popped the question last week. 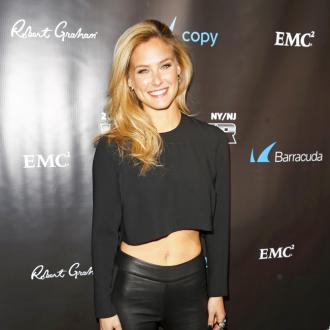 Bar Refaeli has confirmed her engagement.

The 29-year-old supermodel is set to tie the knot with boyfriend of one year Adi Ezra, 40, after he popped the question during a holiday in the Caribbean last week.

A representative for the blonde stunner told the DailyMail: ''We are pleased to tell you that she is engaged.''

Rumours of an engagement began to swirl earlier this week after Israeli website Ynet reported that the businessman had got down on one knee during their romantic vacation in the tropical island.

Bar has previously spoken of how she would prefer an intimate wedding to a lavish celebration.

Questioned on whether she can hear wedding bells in the future, she explained: ''My boyfriend will hear my answer to that, so I better say yes! The wedding of my dreams is very simple, not a lot of people, not in a big place, maybe outdoors, barefoot.''

The Israeli beauty - who previously dated Leonardo Dicaprio - was reported to have split from Adi last June after getting into a furious argument over Rolling Stones rocker Sir Mick Jagger at her birthday celebrations.

It was claimed the businessman accused the blonde beauty of dancing too close to the 71-year-old rocker at an exclusive Rolling Stones party, with one report claiming Adi even grabbed Bar and pulled her off the dance floor at restaurant Mr. and Mrs. Lee.

The couple had been celebrating Bar's birthday at the Rolling Stones' gig in Tel Aviv's Yarkon Park before heading to the private party.