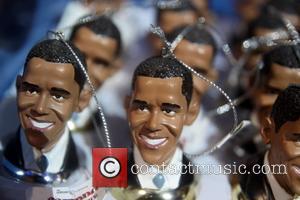 President Barack Obama was in a great mood as he held a series of fundraisers in New York whilst his remaining four Republican candidate rivals were duking it out elsewhere in a televised debate. Obama can turn on the humor and joviality when he needs it and he was on form again and even went as far as breaking into an Al Green song whilst addressing potential benefactors for the Democratic party, reports The Washington Post.
"I'm," Obama began singing, "so in love with you," quoting lyrics from the Green song 'Let's Stay Together,' with Green sitting in the audience laughing along with the rest of the attendees. It was one of many nods of the cap to those Obama had invited to contribute to the fundraiser, earlier on telling film maker Spike Lee "On my first official date with [wife] Michelle, I took Michelle to see 'Do the Right Thing.'" Lee quipped pretty sharply - though less so since he'd heard the story before - "You remember what I said?.?.?.I said, good thing you didn't choose 'Driving Miss Daisy.'" Ahh, riotous.
He was all the more sombre however when speaking to his Jewish doners in one of four different sessions he held, instead focusing on previous wars and the current Iran situation. "When I came in office Iran was united, but the world was divided," Obama said. "But now we have a world united in saying to Iran 'you've got to change your ways.'"