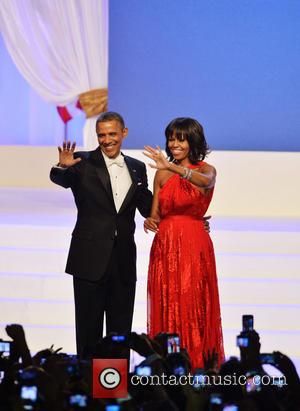 Though 800,000 fans of her father President Barack Obama were packed into Capitol Hill on Monday afternoon (January 21, 2013), young Sasha Obama's yawn became the couple of seconds of video that made the most impression online. The 11-year-old clearly wasn't overawed by the occasion of her father's second inauguration and seemed like she'd had just about enough.

Twitter lit up with excitement over Sasha's apparent boredom at the whole spectacle, with one user, Casey Turner, saying, "Literally every time Sasha Obama is on screen, she isn't paying attention to anything and I really, really love that about her." Sasha and sister Malia - who were also seen playing on their iPhones - seemed to be having much more fun on Saturday, listening to songs like Teenage Dream by Katy Perry at the inauguration ceremony. In a White House news conference last week, President Obama said, "Now that my girls are getting older, they don't want to spend that much time with me anyway, so I'll be probably calling around, looking for somebody to play cards with me or something, because I'm getting kind of lonely in this big house."

During his inauguration speech on Monday, President Obama told the crowd, "'I want to look out one more time because I'm not going to see this again."