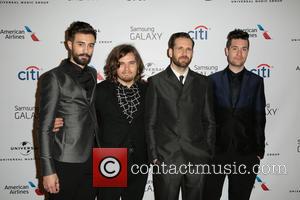 Picture: Bastille - A host of celebs were snapped as they attended Universal Music Group's Grammy After Party which was presented by American Airlines and Citi....

British rockers Bastille performed a special charity gig in the living room of a London apartment on Monday night (23Feb15).

The Pompeii hitmakers played to one hundred lucky fans who had been selected through a lottery system for the special concert, which raised funds for the U.K. charity War Child.

Frontman Dan Smith says, "We haven't done anything like this for a long time. It's been very special for us and it's a pleasure to do something different... It is nice that we all live in London, we can walk into a Tube (underground station) and come to a gig.

"The big part of that was our contribution to War Child, of course, because, you know, our job is completely ridiculous and is a bit of a joke, so anything that we can do to get involved with something serious like that is nice."

British band Elbow will finish the series of War Child charity gigs on Tuesday night (24Feb15) in Manchester, England, in aid of children in conflict zones around the world.