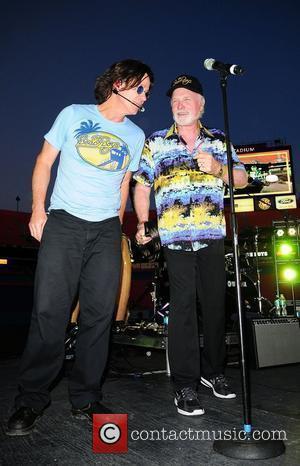 The Beach Boys will release their first original album in more than two decades later this year. The reunited band, featuring Brian Wilson and Mike Love, are putting the finishing touches to the new record, which will hit shelves on 5 June, 2012, according to Billboard.com.
Speaking about the album - penned by every member of the band - Bruce Johnston explained, "[It] reminds me of our [1970] Sunflower album, which is probably one of our least-selling albums, [but] some of the songs there are stunning.It's not a quilt or a pot-luck dinner; it's not like, 'OK, everybody show up with your songs.' It's not one of those kind of albums . It's all brand new". Despite years of infighting and lawsuits, Johnston claims the band are now getting better than ever, especially Wilson and Love, saying, "Nobody was enemies.Everyone had fake judo fights over the years, but no one got hurt". Though the band will only play three European dates - in Germany and Belgium in August - they began their U.S. tour in Tucson, Arizona, on Tuesday evening (April 24, 2012). Playing to a packed crowd at the Anselmo Valencia Amphitheater, the band ripped through classics such as 'California Girls' and 'Good Vibrations', before playing covers of 'Why Do Fools Fall in Love' and Phil Spector's 'Then He Kissed Me.
The tour continues until late August, with shows in Chicago, New Orleans, New York and a huge concert at the Hollywood Bowl in Los Angeles.